Where Did That Name Come From?

Haythornthwaite is a place name. Before surnames came into common use, around 1200 - 1400, a man would be called Richard of Hathornthwaite.
The spelling is not very important. The poor clerk trying to record a name like this, for a peasant who could not write, should be pitied not condemned, and Ian Haythornthwaite found upwards of 110 different versions in the church registers he searched. It seems that those members who spread east to Slaidburn seem to start Hayth: and those to the west of the hill Hath:. In the older Slaidburn Church register the spelling varies, but in the fair copy made by William the verger they mostly seem to be Hayth:
The current descendants of the Blackburn-Burnley tribe all use the 'y' and the current non-immigrant stock round Caton and Quernmore omit it. The pronunciation all over the fell today is Hathunut.
Hagthorn is the old Norse for Hawthorn, and Thwaite means a clearing. We didn't come over with the Normans, we were here before those uncivilised barbarians landed. The stock was probably Norse, mixed with Angle. Lancaster was a civilised place in Roman days, and there are relics of a Christian Church there before they left in 410 A.D. The road from Lancaster to Dunsop Bridge through the Trough of Bowland is so direct that it is believed to have been Roman. It is a known packhorse route of considerable age, and it passes within a mile of the hamlet of Hathornthwaite, near Abbeystead. 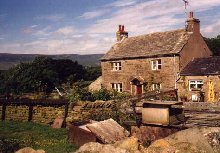 John Haythornthwaite of Tarnbrook, Yeoman, (d.1630) is our earliest confirmed ancestor, and as such a visit to this hamlet on the Duke of Westminster's Abbeystead Estate is well worth while for its sense of background. No buildings linked to the family remain.
To the south was the hamlet of Haythornthwaite, of which Haythornthwaite Farm is the only remaining building. We have no known ancestors who lived here.
Until Peter Haythornthwaite began his researches, Richard of Sykes (before 1679 to 1762) was the earliest known Haythornthwaite ancestor. Sykes farm lies on the unclassified road from Dunsop Bridge to Lancaster by way of the Trough of Bowland-the only east-west road across the Forest of Bowland. Though known as "Richard of Sykes" he lived mainly at Tarnbrook and Dinkling Green which is shown in the title heading of this page. 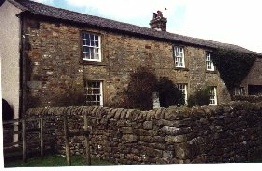 Dinkling Green Farm was in Haythornthwaite occupation from about 1690. Still Visible is H-EL-1774 over a doorway for Edward and Lettice Haythornthwaite. As can be seen from Peter's notes Dinkling Green was an important Haythornthwaite centre.
Whitendale Farm was the home of Richard Haythornthwaite (1755 to 1825) who had inherited it from his father, Edward of Higher Fence in 1799.
Whitendale lies some four miles north of Dunsop Bridge by way of a track road . The road to Brennand branches off to the west and Batrix Fell and Batrix lie to the east. This road goes through the Forest of Bowland at its wildest.
In the late 18th century it was the home of Ellin, wife of Robert Haythornthwaite. She was a notable surgeon, seemingly most successful in cases of severe trauma