For Use on the Milling Machine 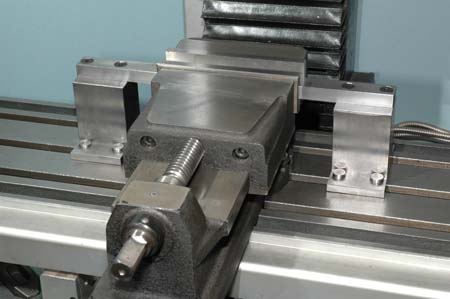 The Machine Vice in Place Using The Alignment Tool 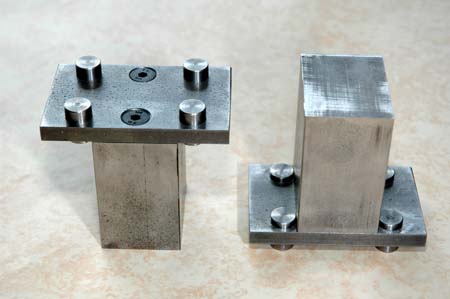 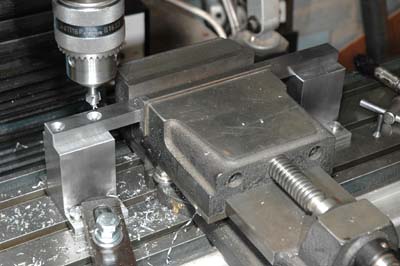 Attaching the Bar to the Stanchions 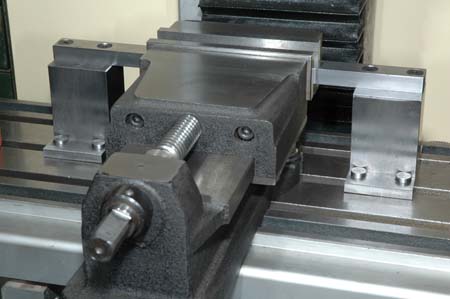 Aligning The Vice Using The Tool

I therefore decided to make the vice alignment tool shown on the left which will quickly re-align the machine vice to the table ways in a matter of seconds.  The device is easy to make and can save hours of wasted time.

The first task was to obtain some steel rod ( preferably Silver Steel ) that is a tight sliding fit into the Tee slots in the mill table. Two short dowels were then inserted into two adjacent Tee  slots, against an engineers square, and the spacing of the slots ascertained by measuring with a digital calliper across the outsides of the dowels and between the insides of the dowels.

Two stanchions were constructed from a piece of plate and a block of steel where the thickness of the steel block was the exact distance between the insides of the Tee slots. Each plate was accurately drilled and reamed for four dowels, such that a pair of dowels would fit snugly into two adjacent tee slots. Four dowels were then inserted into the plate so that the plate would align itself on top of the large steel block.

The plate and the block could then be drilled and tapped for countersunk 6 mm bolts to assemble each stanchion. It is important to note that the height of the block + plate was arranged so that it was just higher than the height of the gap between the vice jaws on the machine vice.

The resulting two stanchions are shown on the right.

The dowels were secured in the reamed holes by Epoxy resin (Araldite).

The machine vice was then aligned accurately to the table ways and clocked to be correct by using a Verdict guage against the FIXED jaw whilst the table was racked back and forth in the X direction.

The stanchions were pressed into the table Tee slots on either side of the vice and the alignment bar was gripped in the vice (therefore true), as shown on the left.

The various parts were assembled in the vice with the vice accurately placed and the stanchions pressed tightly to the milling table. Thus everything was correct to align a vice.

The resulting article is shown on the right

The vice is bolted down with the nuts loose so that the vice may be slid around. The jaws are opened and the tool is inserted into the Tee slots so that the tool straddles the gap between the vice jaws.

The vice is then slid back so that the FIXED jaw is tight against the tool whilst holding the tool tightly to the table. The vice is closed to grip the alignment bar.The vice bolts are now tightened, the jaws opened and the tool removed.

The vice is now perfectly aligned to the table travel and as they say “Robert is your uncle !!”

For Full Construction Instructions go to the Articles Page