SIMPLE DIVIDING
On a Myford Lathe 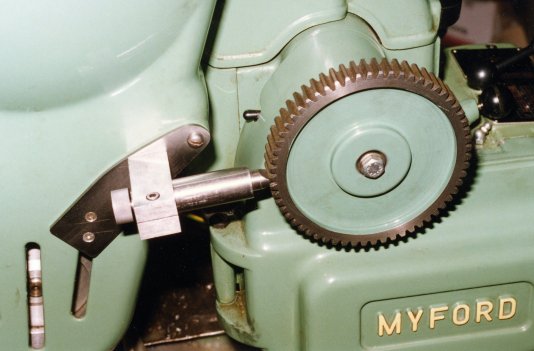 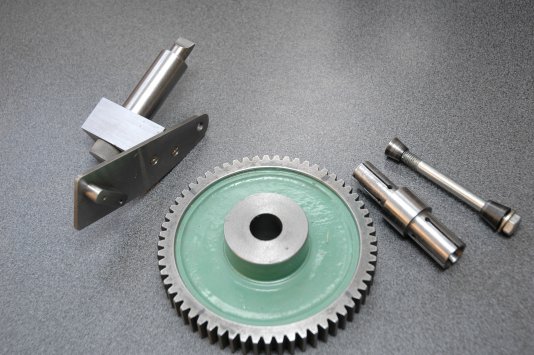 Parts That Make Up The Device 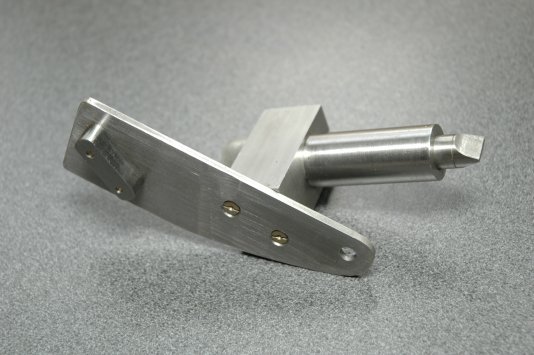 When I want to make a hexagon or square on a circular turned part, I usually transfer it to the milling machine and put it on a rotary table or in a dividing head.

However there are some times when it is simply easier to keep the part in the lathe and to carry out simple dividing there. A procedure such as drilling bolt holes round a cover plate on a steam engine would be a typical example.

I didn't want to modify, or drill holes in my precious Myford, so this simple device was constructed to utilise a 60 tooth gear wheel and to attach to existing points on the lathe.

The gear wheel was "aquired" from some old machine or possibly a scrap yard. It already had a boss, but required to be extended from the end of the mandrel in order to clear the Myford bodywork. A piece of 1" bar was drilled axially to allow a 5/16 BSF bolt to pass through it. One end was turned down to 19/32" to fit the bore of the mandrel and the other end was turned to fit the bore of the gear wheel. The centre boss was left long enough to enable the gear wheel to clear the gear casing. Both ends were then bored out to a steep taper and were then slit at 90deg. to allow the ends to expand.

Two hardened steel taper pieces (cones) were turned and one was bored 5/16", the other tapped 5/16" BSW.
The tapped cone has a small pin set into it, fixed with Araldite. This pin is fine enough to allow it to go into the slits and to stop the cone from turning within the boss, thus acting as a captive nut.

The sprung detent is simply made, but the angles needed careful planning. The small square bar with rounded ends, fixed to the plate, is positioned such that it sits tight into the ventilation slot of the belt guard on the Myford.

The other end of the plate is fixed by a 1/4" BSW bolt which fits into the tapped hole for the knob on the belt guard.

The item is fitted and detached in seconds.