The hall at Burnley in Lancashire was hushed and attentive as Sir Wilfred Grenfell talked, that day in 1922, of his life in Labrador. For here was the man whose achievements had fired the imagination of the world . . . the doctor whose calls took him on single-handed sled journeys over uncharted territories ... who had personally treated 900 patients within two months of his landing in 1892 ... who had inspired similar devotion in his small band of helpers ... who had won world support for the spiritual and medical needs of the 2,000 fishermen and eskimoes scattered over the bleak arctic coast.
But it was when he turned to homely, factual details that Sir Wilfred made his deepest impression upon one man in his audience. That man was Mr. Walter Haythornthwaite, a Burnley mill-owner at whose invitation Sir Wilfred Grenfell was giving the lecture; and the words that spurred him to action were some simple, almost casual remarks on the difficulty of finding the right cloth for arctic clothing.
"The right cloth for Labrador mission workers", said Grenfell, should be light.. because travel was always on foot, following the dog teams. It should also be strong, for once on the trail, the wearer's life might well depend on it. It should be weatherproof, to turn both rain and snow, and windproof to retain wearer's warmth. Above all, it must allow the body moisture to escape.
Mr. Haythornthwaite heard these words as a challenge. After a year of experiment, he produced a cloth in 1923 which Sir Wilfred said was ideal. In a letter, he said :-

How Grenfell Cloth Came to be Made 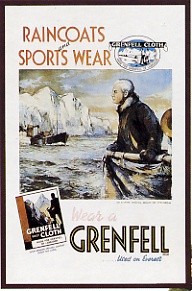 "It is light, durable and very fine looking. It really has been a boon to us all and I think the public should know of it, they will be grateful, I know."
Later, when it was decided to give the cloth a name, Sir Wilfred himself suggested "Grenfell Cloth" and in a further letter, he stated
"We use it constantly-on the ships -on the planes-on the sledges-and motoring. It does not wear out and we cannot afford to take chances-much less dare we recommend to anyone else anything that would fail them at a pinch."